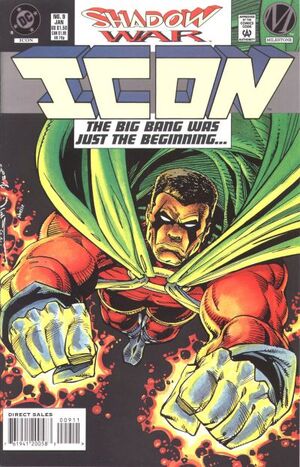 I am damned. Damned to know the entirety of history. Past, present and future, all the same. Equally clear. Equally irrevocable. And so I go through the motions. As if I had a choice.

Appearing in "Shadow of a Doubt"Edit

Synopsis for "Shadow of a Doubt"Edit

Dharma ponders the problem of Icon and Rocket, two heroes not created by his own engineering. He sends two Shadow Cabinet operatives, Donner and Blitzen to attempt to recruit them. Meanwhile, Rocket is also approached by Holocaust, representing the Star Chamber and asking her to join them. Noble visits Mrs. Ervin, and offers to pay for Rocket's abortion. Icon continues to investigate the Big Bang,Empty citation (help)  and travels to City Hall to question Mayor Thomasina Jefferson. A mercenary named Onslaught shows up, and attempts to kill Icon, hinting that his employers are trying to cover up the Big Bang's secrets. Meanwhile, Donner and Blitzen interrupt Holocaust, who has just managed to convince Rocket to join his side. While Donner fights Holocaust, Icon finishes beating up Onslaught, and is approached by Blitzen. Holocaust defeats Donner by burning up the oxygen around her head and knocking her unconscious. Although Icon initially refuses the offer of Shadow Cabinet membership, when he sees that Holocaust has taken Rocket away, he decides to at least for the time being, enlist.