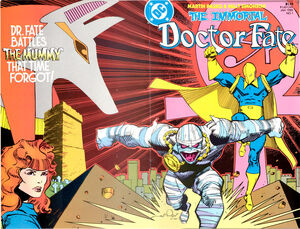 Often has the Crystal Orb of Nabu cast it's awesome radiance over this land... but never before this night has it shone with such urgency -- such foreboding!

Appearing in "The Immortal Destiny"Edit

Synopsis for "The Immortal Destiny"Edit

At the Tower of Fate, Inza Nelson writes in her journal and reflects upon the events that turned her husband Kent Nelson into the sorcerer Doctor Fate.

When Kent was only twelve-years-old, he accompanied his father, archaeologist Sven Nelson, to a dig in Sumeria. There, they unearthed the coffin containing the imprisoned Lord of Order, Nabu. Upon awakening, Nabu produced a poisonous gas that claimed Sven Nelson's life. He then decided to take young Kent under his wing as his apprentice. He used his magic to age him to adulthood, then spent the next several years teaching him the mystic arts. When the time came, Nabu explained that there was only one final test for Nelson to overcome. He had to concentrate all of his power upon Nabu himself. Nelson did as instructed and Nabu's mortal form was destroyed. In his true form, Nabu was a being of pure energy and he used his power to create the artifacts that would serve as the reservoir of his essence. He created a helm and a medallion and gave them to Kent so that he could protect the Earth as the sorcerer, Doctor Fate.

Appearing in "The Search for Wotan"Edit

Synopsis for "The Search for Wotan"Edit

Doctor Fate wants to find whatever happened to the soul of Wotan. With Inza by his side, he travels into the underworld. They traverse beyond the Seven Gates into the region of dead souls. They encounter the essence of wisdom who tells Fate that Wotan is still alive. Doctor Fate and Inza return to Earth by way of the Ferryman across the River Styx. They discover that Wotan is insane and creating a device that will destroy the entire world. Fate uses his magic to communicate with a great eagle who points them in the direction of Wotan's lab. As they enter, Wotan throws a switch intent on blowing up the Earth. Doctor Fate counters the effect with his magic, then punches Wotan twice in the jaw, knocking him out. He places him into suspended animation and leaves him buried deep in the Earth.

Appearing in "The Mummy That Time Forgot"Edit

Synopsis for "The Mummy That Time Forgot"Edit

Sensing a great evil afoot, Doctor Fate flies to the Boston Museum of Egyptology. There, the curator, Anderson and a trustee named Doctor Magill open their new exhibit - the tomb of Khalis. The mummy of Khalis springs to life and begins wreaking havoc. Doctor Fate dissolves through the wall and begins fighting him, but he notices that with each passing second, he begins growing weaker, while Khalis appears to be growing more powerful. Khalis explains that his power is derived from the amulet that Fate wears about his neck. Blindsiding Doctor Fate with some fallen debris, Khalis snatches the amulet and makes off into the night.

A battle-weary Doctor Fate returns to his tower and Inza nurses her husband's injuries. In his civilian guise as Kent Nelson, he has little memory of what transpires while he's adventuring as Doctor Fate. Inza grows frustrated with always having to compete against the essence of Fate for her husband's attention. Angrily, she storms off.

Once he's refreshed, Kent Nelson begins researching the history of Khalis. He learns that the mummy was once a priest of Anubis who sought to take control of Egypt with the powers of darkness. It was Anubis who first gave Khalis the amulet which contains such raw power. In 2030 B.C., the Lord of Order, Nabu fought with Khalis and stripped him of the amulet. As punishment for his actions, he had him mummified.

Inza meanwhile, feels guilty for walking out on Kent and decides to help him out. She goes to the museum in search of clues and finds a broken seal from Khalis' sarcophagus. The fragment contains a hieroglyph of Khalis' true name.

Meanwhile, Khalis attacks the city of Boston, transforming it into a likeness of ancient Egypt as a gift to Anubis. Doctor Fate arrives to battle him once again, but he is unsure of how to conquer him. He tries to harness the power of the sun, but Khalis is too strong. Khalis summons Anubis to present his "gift" to him, but Anubis is unimpressed. He doesn't even remember his most devout worshiper. Inza arrives and gives Fate the fragmented seal. In Egyptian culture, knowing an adversaries true name grants one power over him. Fate casts a spell and invokes the name Hetephketi Tefnakhte. The essence of Ammon-Ra, Egyptian god of the sky, works through Fate and Khalis is destroyed. Fate reclaims his amulet.

Retrieved from "https://heykidscomics.fandom.com/wiki/Immortal_Doctor_Fate_Vol_1_1?oldid=1437326"
Community content is available under CC-BY-SA unless otherwise noted.