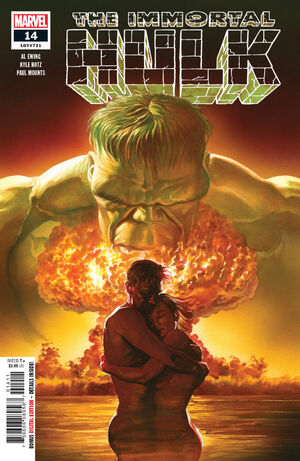 Good news and bad news, General. I've reached the location the Monitor Team specified -- and I'm in position -- but there's no clear shot. Permission to put one through Mrs. Banner's back and finish this--

Appearing in "We Only Meet at Funerals"Edit

• Betty Ross is going through a lot. She’s having a family crisis. Her employers won’t pick up the phone.

• And at her door is the husband she thought was dead. But Bruce Banner hasn’t come alone.

Retrieved from "https://heykidscomics.fandom.com/wiki/Immortal_Hulk_Vol_1_14?oldid=1655051"
Community content is available under CC-BY-SA unless otherwise noted.