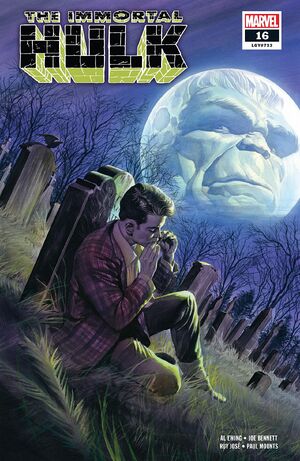 I've been a sidekick for years now. I've seen a lot. I've seen the bad guys win. I've watched the good guys die. And if there's one thing I learned, it's this: The real monster in your life doesn't do loud rants in loud costumes. He doesn't gloat or give speeches. The real monster stays quiet. Keeps his head down. He's got a reputation to think about. He's got a name. Maybe you know it.

• Once upon a time, Rick Jones was the Hulk’s best friend. Now Rick Jones is dead...and gone.

• To learn why, Bruce Banner will have to face roaming gamma experiments, an assassin out for his blood...

• ...and the one thing that can cage the IMMORTAL HULK.

Retrieved from "https://heykidscomics.fandom.com/wiki/Immortal_Hulk_Vol_1_16?oldid=1655043"
Community content is available under CC-BY-SA unless otherwise noted.