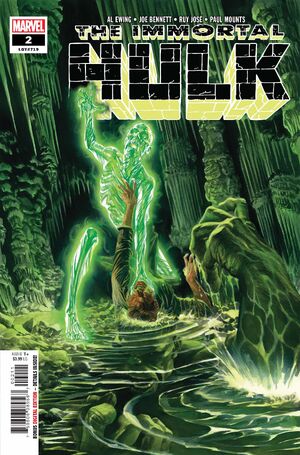 Appearing in "The Walking Ghost"Edit

Synopsis for "The Walking Ghost"Edit

While on a bus bound for a small town in Colorado, Bruce Banner dreams about his first night following the gamma bomb accident, about the fear and stress over having somehow survived taking such a high level of radiation, and the geiger counter in his room constantly making noise. After waking up, he looks out the window and notices a green glow on the side of a mountain. He begins to feel an itch in his skull and decides to get off at the next stop. Bruce stops at a restaurant and orders some breakfast, contemplating Jungian psychology and wondering what his old friends are up to as he eats.

While walking through town, Bruce notices a newspaper headline regarding mysterious deaths at a local gravesite. Asking around at a pub, Bruce learns the grave belongs to Del Frye, a former college football player that died suddenly of an embolism. Upon hearing that Frye's father developed a new kind of radiation treatment, his skull starts to itch again and he leaves to investigate.

Bruce reflects on recent events in his life while on his way to the cemetery, speculating that his recent death and resurrection[Continuity 1] has decreased his intelligence, possibly making the Hulk smarter. He also concludes that the itch in his skull is the Hulk guiding him to his objective. At Frye's grave, Bruce detects the presence of high amounts of gamma radiation and hurriedly places a call to the E.P.A.. Deciding to investigate further, Bruce climes the mountain he saw on the way into town to reach the green glow. At the top of the mountain, Bruce finds a cave full of corpses. He is then attacked by Doctor Frye, Del's father, who has become an emaciated figure with glowing, green skin. Easily overpowering him, Doctor Frye snaps Bruce's neck. Almost immediately Bruce transforms into the Hulk and pins Doctor Frye, demanding to know what's been going on. Frye began to elaborate on his past:

After his wife died, Doctor Frye became obsessed with death and its unavoidable nature, and resolved to discover the key to immortality. Frye developed a serum based on Bruce Banner's research. Frye viewed Banner as a symbol of hope, as Banner was a man who death could not claim. Frye injected himself with his serum and felt rejuvenated, and gaining a healing factor in the process. Due to his son's football career and the potential for brain damage, Frye also gave the serum to Del. Soon after being injected, Del began bleeding green blood from his eyes, and having visions of a green door below everything and a mysterious figure peering out of it. Within seconds, Del collapsed on the floor dead. A while later the serum started to affect Doctor Frye, causing his skin to glow green. He fled up to the mountains and began killing anyone who came across him.

Hulk, unmoved by Frye's story, begins to taunt Frye with the irony of his situation, how despite his best efforts to counter death, he instead became it. Hulk lets Frye know that his son's corpse is radioactive and that anyone that visits his grave could walk away with radiation poisoning. Frye begs Hulk for his life, who proceeds to tear Frye's limbs off, leaving him buried, but alive, in his cave.

Meanwhile, the E.P.A. arrive at Del's grave to dig it up. Opening his casket, Del emerges alive, but with the same appearance as his father: a glowing, green corpse.

Retrieved from "https://heykidscomics.fandom.com/wiki/Immortal_Hulk_Vol_1_2?oldid=1655108"
Community content is available under CC-BY-SA unless otherwise noted.