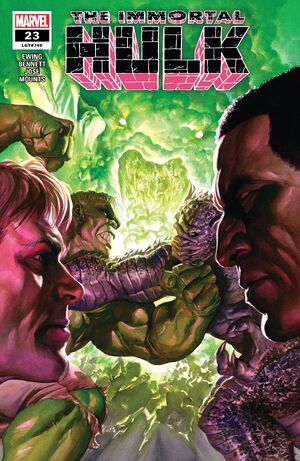 The plan is still holding together. Our side of it, at least. But there's that other side. The plan we didn't make. The plan we couldn't make. Because the one thing nobody's ever been able to do... is plan for the Hulk.

Appearing in "The Face of the Enemy"Edit

• The war has come home – and Shadow Base is the battleground.

• The stage is set for the final confrontation between the new ABOMINATION...

Retrieved from "https://heykidscomics.fandom.com/wiki/Immortal_Hulk_Vol_1_23?oldid=1671478"
Community content is available under CC-BY-SA unless otherwise noted.