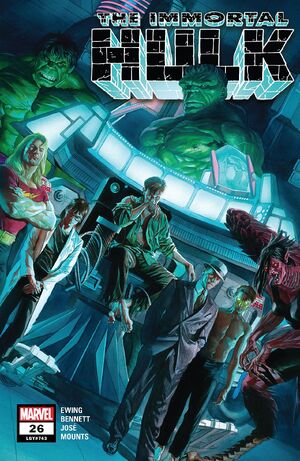 Yeah. I watched your little pirate broadcast. Your manifesto. Tell me, Bruce -- do you still play Minecraft on peaceful?

• He’s got an underground fortress. He has powerful allies. He’s even got henchmen.

• He’s got everything he needs to declare war on human society as we know it. He’s the most dangerous man in the world...

• ...and BRUCE BANNER is just getting started.

Retrieved from "https://heykidscomics.fandom.com/wiki/Immortal_Hulk_Vol_1_26?oldid=1678909"
Community content is available under CC-BY-SA unless otherwise noted.