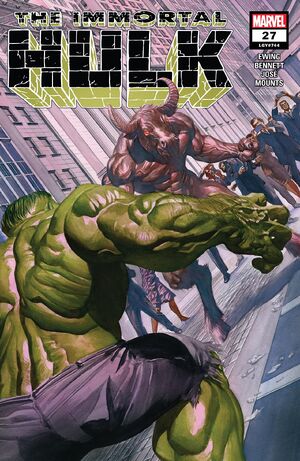 I betrayed the Earth to elves, and I am still here. Roxxon West is why. I placed four B.E.S.E.R.K.E.R. units on guard. Elite Hulk-level troops. Trained to attack and destroy without hesitation. If they aren't enough... then Bruce Banner will have achieved something previously thought impossible. He will have hurt the Roxxon Corporation.

Appearing in "This is the Day"Edit

• Some monsters are born from gamma... other monsters worship a different kind of green.

• In his war on the human world, the Immortal Hulk is taking the fight to its lords and masters - the Roxxon Corporation.

• But when you mess with THE MINOTAUR... you get the horns.

Retrieved from "https://heykidscomics.fandom.com/wiki/Immortal_Hulk_Vol_1_27?oldid=1678910"
Community content is available under CC-BY-SA unless otherwise noted.