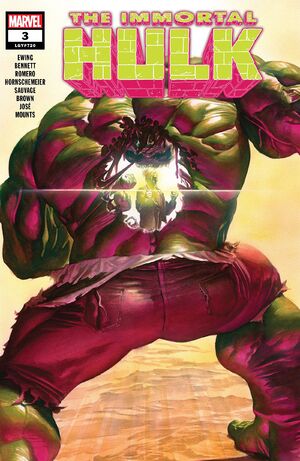 You're not listening! The One Below! It got into her somehow! We need an exorcism. She needs one.

Synopsis for "Point of View"Edit

In South Dakota, Arizona Herald reporter Jackie McGee meets with four people, a cop, a bartender, an old lady, and a priest, to get the full story about an incident that occurred at a church on Mercer Avenue. Through four distinct viewpoints, she pieces together what happened:

The cops responded to a hostage situation at the old church on Mercer Avenue. Inside they found Lou Lembert, A.K.A Hotshot, who proceeded to use his powers to shoot at the officers. Across town, Bruce Banner walked into a bar asking to use the restroom. The bartender refused based on Banner's shabby clothes and his overall appearance, believing he looked like a serial killer and that he would use the restroom to do drugs. After a brief argument, Banner noticed the events unfolding at the church on a TV in the bar. Grabbing a knife from the table, Banner ran out the door.

At the church, Hotshot began ranting and raving to the priest about his girlfriend, Jess Harrison. He explained that Jess had become possessed by "the One Below" and demanded the priest preform an exorcism on her. Terrified, the priest prayed to God for salvation and deliverance. At that moment, the Hulk crashed through the church's stained glass window. Hotshot begged the Hulk to help his girlfriend, to which the Hulk responded by crushing Hotshot's hands. Enraged, Hotshot blasted a gaping hole directly through the Hulk. To everyone's horror, the wound simply healed itself. Hotshot, shook by what had just happened, said the Hulk was the One Below before the Hulk knocked him out.

After he was arrested, the cops, and the priest, went to the motel where Hotshot and Jess were staying. There they found Jess's body tied to a chair, with her head turned completely around and a peaceful smile on her face. On the wall were written the words "GREEN DOOR." Mrs. Melrose, who was present at the church, visited Hotshot in prison. He alleged that he had to tie Jess to the chair because her powers were going crazy, but denied killing her. Some time after Mrs. Melrose's visit, Hotshot hung himself in his cell.

Back in her hotel room, Jackie mulls over the incident and determines that the only way to get to the bottom of it is to get in contact with Bruce Banner. While she's dictating her thoughts, she gets a call from Walter Langkowski, Banner's college roommate and the superhero known as Sasquatch. Walt believes Jackie is the only one actively looking for the Hulk after his resurrection[Continuity 1] besides himself. Walt wishes to also get in touch with Banner, as he has something he wants Bruce to look at.

Retrieved from "https://heykidscomics.fandom.com/wiki/Immortal_Hulk_Vol_1_3?oldid=1655107"
Community content is available under CC-BY-SA unless otherwise noted.