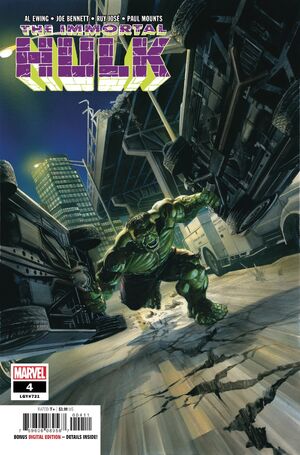 Ever been hit by a Gamma Bomb, Jackie? It's a trip.

Appearing in "Time of Death"Edit

Synopsis for "Time of Death"Edit

Jackie Mcgee waits at an airport in Sioux Falls, South Dakota for Walter Langkowski's plane to arrive. While she waits, Jackie argues with her editor Murray over the phone about her expenses. She tells Murray that since the Arizona Herald was the first to break the news of the Hulk's return, they need to find Bruce Banner if they want to stay ahead of the competition, and if they can't find him, Walter, Bruce's college roommate, would be the next best thing. Walter arrives and introduces himself to Jackie as Sasquatch, Canada's diplomat to space. Jackie tells him that there's been a Hulk sighting just across the state line. As the pair drive into Minnesota, Walter fills Jackie in on his past association with Bruce, and his origin as Sasquatch:

Walter met Bruce at Penn State University, Banner having transferred from Desert State University, and Walter being there on a football scholarship. While the two largely got along amicably, they sometimes had their disagreements. When Bruce learned Walter wanted to get into the field of gamma research, he lashed out at him, calling him a "half-smart jock."

Years later, Walter was watching TV when the Hulk's identity as Bruce Banner was revealed to the world. This prompted Walter to quit playing football professionally and make it his mission to replicate the conditions that caused Bruce's transformation. With the backing of the Canadian government's Department H, Walter conducted an experiment in the Arctic Circle where he bombarded himself with Gamma Rays. Because the walls of reality are thin up in the Arctic, the rays burst opened a door, a green door, to a world of monsters, allowing the Great Beast Tanaraq to possess his body, giving Walter the power to assume Tanaraq's form.[Continuity 1]

Jackie asks how long ago Walter was possessed. Walter reassures Jackie that Tanaraq is dead,[Continuity 2] and that he's now fully in control of his Sasquatch form. The two arrive at the scene of the Hulk's most recent sighting but find nothing but police and smashed cars. Jackie tells Walter they should look for a bar. When Walter asks why, she tells him that Bruce sought information at bars in Colorado and South Dakota, and so they should too. At a bar called Trimpe's Burger & Beers, the waitress tells Jackie that Bruce came in asking about Noah Swanson, a local meth dealer. As they talk, a fight between two patrons breaks out in the back of the bar. Walter attempts to break the two up but is stabbed in the back by one of them.

Walter is rushed to the hospital and prepped for surgery. Jackie tells the receptionist that Walter is usually "big and orange," but at that moment he wasn't. She quietly questions to herself why Walter didn't change when he was attacked. After talking with a police detective regarding the incident, Jackie sits in the waiting room. To Jackie's surprise, Bruce covertly shows up at the hospital and asks her what happened to Walter. Jackie fills him in and asks what he's doing there. Bruce tells her he tracked Walter's unique gamma signature. Bruce explains that Walter's gamma signature is exactly like his own, the sun has gone down, and that the night is his time.[Continuity 3] He warns Jackie they need to evacuate the hospital immediately.

Meanwhile, in the operating room, Walter flatlines on the table. Before the surgeons can call a time of death, Walter's body begins to transform into Sasquatch. The surgeons call out for God above, to which Sasquatch states he is "quite the reverse."


• And Walter Langkowski is going to die today, because he went looking for Banner...

Retrieved from "https://heykidscomics.fandom.com/wiki/Immortal_Hulk_Vol_1_4?oldid=1655106"
Community content is available under CC-BY-SA unless otherwise noted.