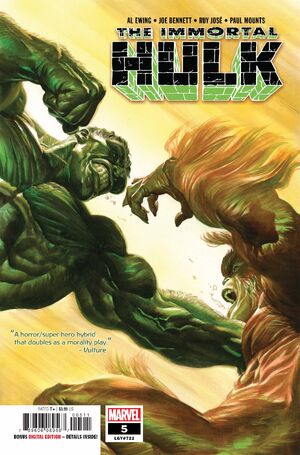 Appearing in "In Every Mirror"Edit

Synopsis for "In Every Mirror"Edit

Sasquatch meets with Captain Marvel and Puck to discuss his recent field work with Alpha Flight. Carol believes Walter has been acting unusually aggressive in the field lately[Continuity 1] and she voices her concern that Walter might be loosing control of his Sasquatch form. Walter reassures her that Tanaraq is dead; that he's no longer possessed. Puck interjects that in the year he's served on the Alpha Flight Space Station, he's seen Sasquatch every day, but he's never seen Walter once.

Later, while standing in front of a mirror in the locker room, Walter tries reverting back to his human form. He encounters some difficulty in transforming, but manages to return normal. As he considers talking to someone about it, he looks up at his reflection in the mirror, only to see the Sasquatch staring back at him.

Bruce Banner tells Jackie McGee to evacuate the hospital while he goes and deals with Sasquatch, or whatever it's become. Jackie tells Bruce he owes her answers, but Bruce tells her he owes a lot of people and that she will have to wait. Bruce enters the operating room and finds Sasquatch standing over the corpses of three doctors, licking their blood off its claws. Bruce asks to speak with Walter, but Sasquatch tells him he is not Walter, before slashing Bruce's throat. Bruce falls to the floor and bleeds out. Almost instantly, Bruce turns into the Hulk and attacks Sasquatch.

As they fight, the Hulk deduces that Walter stayed in his Sasquatch form for too long, allowing whatever it is that's possessing him to enter through the Green Door.[Continuity 2] This same entity also took possession of Hotshot's girlfriend.[Continuity 3] Hulk pins Sasquatch up against a wall and demands to know who he really is. Sasquatch tells Hulk to turn around. Hulk turns and sees his reflection in a window, but instead of Sasquatch, he sees his deceased father Brian.[Continuity 4]The Hulk is stunned by this, allowing Brian/Sasquatch to gain the upper hand. He begins taunting the Hulk, calling him a monster and telling him he should have killed him as a baby, before punching him through a wall.

Meanwhile, Jackie is still trying to evacuate the hospital. She asks if the patients can be moved any faster but a security guard tells her there are patients on life support that are hard to move. The security guard runs back into the hospital to see what he can do, with Jackie following him.

Hulk cowers on the floor refusing to believe his father is alive. Brian reminds the Hulk that he can see ghosts and smell liars, so he would know if it wasn't really him. Hulk eventually regains his composure and fights back, demanding to know who or what returned Brian to life. Walter temporarily gains control over the Sasquatch form and tells the Hulk that the entity needs a "host personality" to function in the physical world. Brian regains control and jabs his claws into the Hulk's eyes. Brian starts ranting about how Walter Langkowski didn't know how to use gamma radiations, and asks the Hulk if he understands what needs to be done, and how many people he has to kill. As Brian stabs at the Hulk with his claws, the security guard shoots him with a taser. Brian turns around and slashes the guard's stomach, killing him. He turns his attention to Jackie, but before he can attack her, he's grabbed by the Hulk, who proceeds to absorb all of Sasquatch's gamma radiation, returning Walter to his human form.

With the threat subdued, the Hulk asks Jackie why she, a reporter from a small town newspaper, drove across several states just to find him. She tells him that when she was 15 years old he destroyed her home and her neighborhood in a rampage, and ever since that day she's had questions. The Hulk allows Jackie to ask one quick question. Tearfully, Jackie asks how she can be like the Hulk. Shocked, the Hulk tells her to just go home. Walter regains consciousness and tells Jackie he can no longer feel the Sasquatch inside of him, and wonders where he went.

The Hulk leaves the hospital and passes by a car in the parking lot. In the window he sees not his own reflection, but Brian's staring back at him with a sneer.

• The monster inside Bruce Banner is fully unleashed — in a brutal, bloody battle with the monster who made him.

• Blood will flow. The truth will come out. There can only be one winner...

Retrieved from "https://heykidscomics.fandom.com/wiki/Immortal_Hulk_Vol_1_5?oldid=1655105"
Community content is available under CC-BY-SA unless otherwise noted.