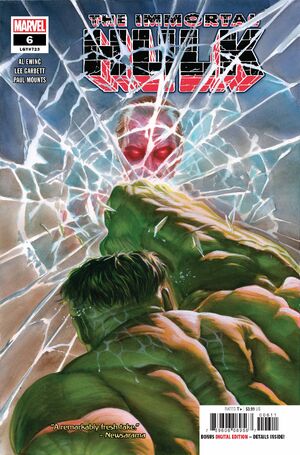 Not you. The thing that stole your body at the point of death and made it a murder weapon. Not Tanaraq, nor any of the Beasts. They still slumber. This is something deeper. Imagine... a primal shadow, waiting in the darkness underneath all that is. Creation's other face. The face we cannot bear to see. The One Below All.

Bruce Banner sits alone in a motel room, staring at the Hulk in a mirror. The Hulk angrily pounds on the glass and manages to crack it. Bruce notes the Hulk has been banging on the mirror for the last two days and this is the first time he's been able affect it. Bruce hasn't let the Hulk out since his fight with Sasquatch. His recollection of the event is hazy, but he knows the Hulk absorbed Sasquatch's gamma energy into himself, and he suspects whatever was possessing Walter Langkowski came with it. On the other side of the mirror, the Hulk confronts his own reflection: Brian Banner.

Bruce decides he needs to speak with the Hulk. Using a technique known as "automatic writing," Bruce empties his mind and lets his unconscious write him a message. It's a single word: Home.

Betty Ross-Banner watches a news report about the Hulk's recent battle with Sasquatch in Minnesota. Betty tells herself that it isn't really Bruce; he would have called her once he came back from the dead if it was. She turns off her TV and begins to cry.

Six figures at an undisclosed location called Shadow Base monitor the Hulk's allies, including Betty, Leonard Samson, Skaar, and Rick Jones' gravesite. The monitors are hanging upside down, they have wires protruding from their empty eye sockets, and large cables attached directly to the backs of their heads. One of the monitors expresses that he's starting to feel like a "creep." His words are cut short by his boss, General Reginald Fortean, who dismisses the monitor from duty and makes it clear to the rest that the Hulks allies are the enemy.

Fortean converses with a Dr. Clive. Clive asks if General Thaddeus Ross would mind Shadow Base keeping tabs on his daughter if he knew. Fortean explains to Clive that it isn't Ross's business to know as Ross is too close to the Hulk. Fortean also states that the General is better off dealing with the current situation with Captain America and leave control of Shadow Base in the hands of a second-in-command, which, as Clive puts it, gives him plausible deniability. Fortean tells Clive that Ross once became a Hulk himself, an act that almost lead to victory over his enemy. Fortean believes that the General only made one mistake: he thought he could defeat the Hulk with only one monster.

Fortean and Clive enter a lab where tests are being conducted on Del Frye, who is being contained in a large tank. Clive asks Dr. McGowan for an update on Frye's condition. She informs him that Frye is in agony, but with some modifications to the tank mix, his pain can be reduced or even eliminated. Clive tells her to forget about his pain and instead asks Jase where they're at with replicating Frye. Jase says that the gamma serum in Frye's blood is far too complex to figure out on their own. Clive explains to Fortean that without a Hulk to study they can't make any progress. Fortean states they don't yet have the resources to capture the Hulk. Clive clarifies that they don't need the Hulk, but rather a Hulk, preferably one no one would miss.

On the Alpha Flight Space Station, Walter gets examined by Shaman. He reiterates that Shaman had already told him that Tanaraq was gone and the Great Beasts were inactive. He reveals the reason why he tried to find Bruce was because he thought the monster he saw in the mirror was psychological in nature, like the Hulk. Walter says, unlike the Hulk, he would never choose to hurt anyone. Jackie McGee, there because she was a witness to Walter's stabbing, expresses doubt, citing Walter's efforts to specifically turn himself into a Hulk. Everything that's happened thus far was because Walter made that choice.

Puck asks about the stabbing. According to her, the attack felt "too random," and that the two bar patrons that started the fight were calm when she and Walter walked in, but seemed to get more aggressive in his presence. Walter angrily accuses Jackie of blaming him for his own death, but Shaman disagrees. He theorizes that the thing that stole Walter's body is a being far worse than Tanaraq. A shadow waiting in the darkness underneath. Creations other face. The One Below All.

Jackie is doubtful about Shaman's theory, and asks if he understands how it would sound to a jury. Captain Marvel enters the room and tells Jackie she does understand. She asks Jackie to leave the room because she wants to talk to Walter. Carol tells him that she was just speaking to General Fortean, who had threatened Walter with extradition, trial, and possibly death by lethal injection. Fortunately, the General can get Walter exonerated if Carol and her team capture the Hulk. Shaman remarks that without Sasquatch, Alpha Flight is incapable of dealing with such a task. Carol agrees, but her other team can.

Bruce walks along a country road in Iowa, hitchhiking his way "home." Carol shows up behind Bruce with the rest of the Avengers. He asks her if this is a social call, or if she's there on business. Carol tells him that while the Hulk has saved the world in the past, which has earned him a lot of rope, the Avengers have changed, and his rope is about to run out.

Bruce spots Jennifer Walters and says he's disappointed in her. She explodes at him, ranting about how he had himself killed while she was in a come, knowing full well what that would do to her. She starts to turn into She-Hulk but is calmed down by Thor. Carol assures Bruce that they don't want to hurt him, but he needs to come with them. Bruce lets her know that it's night time; the night is his time.

Carol reveals she knows all about the Hulk's new method of transformation and she has no intention of killing him. Bruce responds with "That's my secret, Captain. I'm already dead." With that, Bruce instantly transforms into the Hulk.

• Bruce Banner is alive — and everyone knows it. Now he’s hunted by the government, Alpha Flight, the mysterious Shadow Base...and the Avengers. And someone’s going to find him first.

• But Bruce has bigger problems. Something terrible has infected him. Something with unspeakable plans for humanity. And the only one who knows about it...