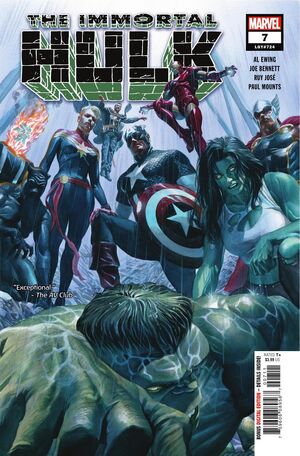 This wasn't the Devil, Tony. This was a friend in need. And we killed him...

In Georgeville, Iowa, a boy named Julien plays with action figures of Iron Man and Captain Marvel. He's suddenly picked up by his father Todd and told they have to immediately evacuate the house with the rest of their family. His wife Michelle tells him to let Julien let him bring his toys. Todd tells his wife they've got a "Green Alert," meaning they need to drop everything and go to the evacuation point. Seconds after leaving the house, Ghost Rider's Hell Charger crashes into their truck. Julien and his family flee the scene in terror.

On the outskirts of town, the Hulk battles the Avengers. He hits Thor in the head so hard he loses a tooth and knocks him off-balance. Captain America rushes to his defense and blocks one of the Hulk's punches with his shield. Hulk mocks Cap by calling him "Captain Hydra," and asking if he were to rip Steve's head off would two take its place. Black Panther suddenly jumps on the Hulk's back and delivers a blast of kinetic energy directly to the head, a move Panther hopes will bring the Hulk to his senses. Iron Man, outfitted in a new model Hulkbuster armor, suggests using a weapon named "Code: Helios" parked 10,000 feet above them if it doesn't. Black Panther says it should only be used as a last resort.

Cap asks Thor if he's okay since he's never seen him get hit in the head that hard. Thor rambles about the Hulk seeing souls and smelling lies. Cap believes Thor has a concussion because lies don't have a smell. Thor explains that while Steve lives in the mortal world, a world of science and law, he comes from the world of myth and legends. The world of gods. He suggests that the mortal world, in its rage and pain produced something close to a god, or perhaps a devil.

The Hulk is amused by the devil moniker, saying it works for him. He claps his hands together with enough force it causes a massive shockwave, severely damaging the Hulkbuster. Stark tries desperately to eject from the suit while the Hulk tears off its arms. Black Panther pleads with the Hulk to help get Stark out, or he'll die, but the Hulk responds by hitting Panther with one of the Hulkbuster's arms. Stark ejects from the armor seconds before it explodes. He radios the rest of the Avengers and tells them he will prep Helios. Captain Marvel, who is evacuating the townspeople on board Alpha Flight transports, tells him not to since they're in a civilian area. Captain America initially agrees but recants once he sees the Hulk survived the explosion. In the meantime, he sends She-Hulk into battle.

She-Hulk jumps into the fray and beats on her cousin. The Hulk quickly grabs her fist and the two grapple. The Hulk taunts her, saying how he is everything Banner wanted to hide, while She-Hulk was everything Jennifer Walters wanted the world to see her as, but these days the line between them is harder to see. He calls her the Hulk, causing her to lose focus. The Hulk lands a punch which sends her flying two miles away.

Stark states that the battle will end with the Hulk killing someone. He asks Carol if the civilians are out of Helios' range. She confirms that the Hulk is the only life form within range, but she pleads with him not to use Helios. He interrupts her by saying they have no choice. Stark fires the Helios Laser, a massive beam of UV light that destroys Georgeville.

From aboard the transports the evacuees react in shock and horror at the destruction of their town. Some question what happened; others pray to God. Julien gets up from his seat and walks up to Carol to show her his Captain Marvel action figure. He tells her he's also got an Iron Man, but he left his Thor at home. He asks her if they'll be going home soon. She looks at the figure in silence before she tells him to sit back down; she has something to tell everyone.

Back on the ground, Captain America, Black Panther, and a hologram of Tony Stark stand over the charred corpse of Bruce Banner, which is being kept in such a state by five drones bombarding it with UV light. Cap feels regret for their actions. He was their friend, and they killed him. Black Panther reassures him that it is only temporary, as, without the UV drones, the Hulk would rise again. He asks Cap if they would survive. Ghost Rider is healed, but Thor's skull is still fractured and requires treatment; She-Hulk in uninjured, but won't say what Hulk said to her. Panther believes his conscience is clear because they would be burying one of their own had they not used Helios. Cap brings up another problem: what do they do with Banner?

A while later Banner awakens at Shadow Base. He's situated upside-down and is face-to-face with Dr. Clive. Clive explains to Bruce that the Avengers handed him over to Secretary Ross, who then handed him over to U.S. Hulk Operations. He wants Bruce to think of what's coming as poetic justice for all the pain he's caused people over the years. While he talks, Bruce's vision turns green and bubbles form around his eyes. Clive back out of the room on a self-balancing scooter, leaving the Hulk's screaming, severed head in a jar on a shelf next to various other organs and body parts of his.

• But how far will even Earth’s Mightiest Heroes go to cage... the IMMORTAL HULK?

Retrieved from "https://heykidscomics.fandom.com/wiki/Immortal_Hulk_Vol_1_7?oldid=1655102"
Community content is available under CC-BY-SA unless otherwise noted.