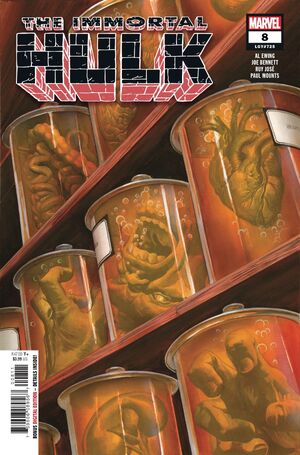 Hnh. Not sorry enough. You wanted science. You wanted a set of rules. From me. Big mistake. See... science is the other guy. And when you mess with him... I take it personal.

Appearing in "His Hideous Heart"Edit

Synopsis for "His Hideous Heart"Edit

Following his fatal battle with the Avengers that left him a charred corpse,[Continuity 1] Bruce Banner is captured by U.S. Hulk Operations and sent to Shadow Base. The base's scientists dissect his body and place his organs and body parts in separate jars, including his head. They remove his heart during the daytime but once the sun goes down it, along with the rest of him, begin to change. With the use of an adamantium scalpel mounted on a seven million dollar hydraulic arm, they manage to cut the heart in half. After a few minutes, both halves begin to beat.

The heart is presented to Dr. Clive, who asks his fellow scientists if they have any ideas on how and why it's still beating. He notices the Hulk's severed head trying to speak and he taunts him with the fact he can't talk without lungs. The Hulk simply responds by having his severed hand give Clive the finger. Clive picks up the heart to "play" with it. To his surprise, both halves pull themselves together. Clive and his assistant Charlene discuss the Hulk's powers of regeneration, specifically why his individual parts don't grow into new Hulks. Clive states they need to know what the rules are because otherwise, how can they break them?

On board the Alpha Flight Space Station, Captain Marvel tells Jackie McGee that neither Alpha Flight or the Avengers know where the Hulk ended up after he was handed over to the government. Thaddeus Ross denies any knowledge, General Fortean, who requested the Avengers bring the Hulk in, can't be found, official requests are lost, and other contacts in Washington have been fired without reason. She wonders if the government lost the Hulk, or if they kidnapped him, but she believes the negative press should put pressure on whoever has him. Additionally, she reinstates Walter Langkowski to active duty. Walter questions why Carol would want him back in the field since he can no longer turn into Sasquatch.[Continuity 2] Carol tells him she doesn't need Sasquatch, she needs Walter Langkowski, a noted gamma expert with some insight into how the Hulk thinks. She wants Walter to head up a new task force to locate the Hulk: Gamma Flight.

Back at Shadow Base, Dr. Clive argues with General Fortean over the phone about Carol Danvers' public announcement of Gamma Flight and the sudden spotlight she's placed on U.S. Hulk Operations. Fortean orders all Shadow Base staff to relocate to Site B. Clive tells Charlene to prep Del Frye for transport. He'll deal with another one named "Red Dog" just as soon as he's finished with the Hulk.

Clive notices the Hulk's head is smiling at him. Clive starts taunting the Hulk by describing what they're going to do with him in graphic detail but the head keeps smiling. He tells him that they're going to learn his secrets, how he can move, and what he can do. Clive stops mid-sentence because he suddenly realizes that the Hulk allowed himself to be experimented on, since if they know what he's capable of, so would he. At that moment one of the Hulk's severed hands snaps its fingers. The resulting shockwave is powerful enough to shatter every glass jar in the lab. All of the Hulk's organs and body parts land on the floor and begin to pull themselves together around Clive. Clive begs for his life and tries to apologize for what he's done but his cries fade out as he's absorbed into the Hulk's body. Now fully reformed, the Hulk grabs Clive's lab coat and tunnels his way out of the base. Charlene comes to Clive's lab to talk to him about Del Frye's tank mix,[Continuity 3] but only finds a massive hole in the floor.

The Hulk makes it to the surface and discovers he's in northern New Mexico, ironically close to "home."[Continuity 4] The sun had risen by the time the Hulk reached the surface so he painfully transforms back into Banner. Donning Clive's lab coat, Bruce resumes his trek "home." He's overcome by an uneasy feeling like he's been infected. He feels certain that the Hulk crossed the line and took a life, and for a moment, he thinks he can hear his father's voice laughing at him from everywhere at once.[Continuity 5]


• Bruce Banner is no longer a threat.

• That just leaves the IMMORTAL HULK...

Retrieved from "https://heykidscomics.fandom.com/wiki/Immortal_Hulk_Vol_1_8?oldid=1655072"
Community content is available under CC-BY-SA unless otherwise noted.