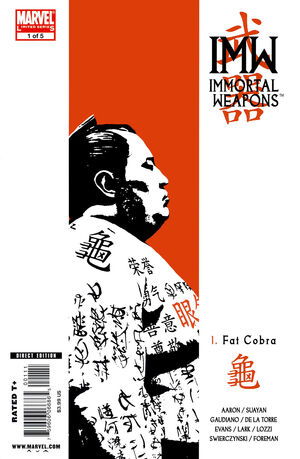 Ha! A disgusting mound of blubber like you? I've heard of Blind Cobra and One-Armed Cobra but never a Fat-Ass Cobra!

Appearing in "The Book of the Cobra"Edit

Synopsis for "The Book of the Cobra"Edit

Fat Cobra has hired Carmichael to discover his past. And he does so, revealing that Fat Cobra is not as great as he likes to think.

Appearing in "The Caretakers Part 1"Edit

Synopsis for "The Caretakers Part 1"Edit

Iron Fist watches over the daughter of a man he helped send to prison.

Retrieved from "https://heykidscomics.fandom.com/wiki/Immortal_Weapons_Vol_1_1?oldid=1432998"
Community content is available under CC-BY-SA unless otherwise noted.