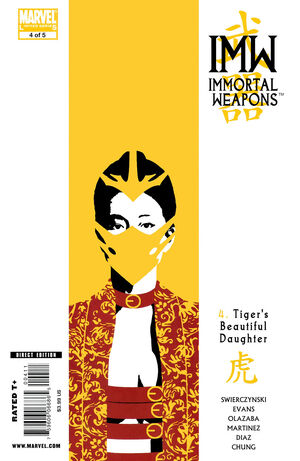 There is no enemy more deadly than one with a pretty face...

Tiger’s Beautiful Daughter – her beauty is legendary; her kung fu, unmatched. Now learn how one of the most gorgeous women in the world also became one of its deadliest fighters! In a distant dimension, undefeatable men fight wars to protect their beautiful, well-groomed wives, sisters and daughters. But when the men prove not so undefeatable after all, who will stand and fight for her home…and change a world in the process?

Appearing in "The Caretakers, Part 4"Edit

Synopsis for "The Caretakers, Part 4"Edit

Retrieved from "https://heykidscomics.fandom.com/wiki/Immortal_Weapons_Vol_1_4?oldid=1433001"
Community content is available under CC-BY-SA unless otherwise noted.