Start a Wiki
Part of the 'Genesis' event 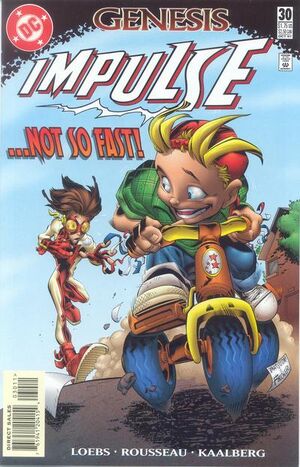 They've lost their faith in … gravity?

Due to the events in the Genesis storyline, a cloud of depression has hung over Manchester, Alabama, causing everyone to lose faith in what means most to them. This also causes Impulse to temporarily lose his super speed and gain new powers like explosive touch and the ability to shrink to the size of an atom. Meanwhile, Max Mercury is captured by his old nemesis, Dr. Morlo.

Retrieved from "https://heykidscomics.fandom.com/wiki/Impulse_Vol_1_30?oldid=1435341"
Community content is available under CC-BY-SA unless otherwise noted.