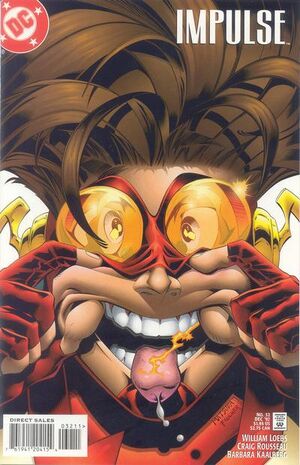 Now there's an unusual concept. A teenager who doesn't understand the person who's raising him.

Carol Bucklen and Preston Lindsay are both called as witnesses in the upcoming toxic waste dumping trial, and since there have been a lot of threatening letters surrounding the trial, the police sends two undercover deputies to act as bodyguards for the teens. One of the threatening letters targets the hospital where Preston's mom is being kept because she was being abusive. Most of the people in the hospital are evacuated, but Preston is still inside with his mom. Impulse arrives at the scene, but he's worried about hurting his friend again, so he spends the entire time outside, wondering what he should do. Luckily, the letter was just a hoax, and Preston was able to learn that his mom was abused as a little girl by her grandfather.

Retrieved from "https://heykidscomics.fandom.com/wiki/Impulse_Vol_1_32?oldid=1435343"
Community content is available under CC-BY-SA unless otherwise noted.