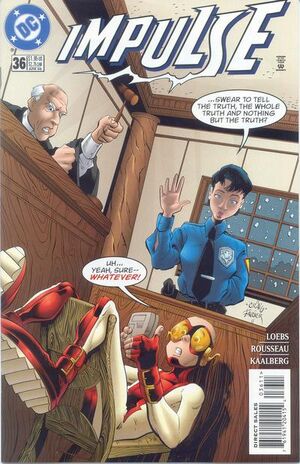 It was a good idea. I thought it through.

Sick of everybody pulling his hair, Impulse decides to shave it all off. So Max Mercury gets him a wig to wear when he's Bart Allen.

The trial for the toxic waste dumpers begins, and Bart is called to be a witness for the defense. The defense attorney's daughter, Robbie McDonald, is upset that her dad would defend known criminals, so she uses her knowledge of music to become The Song of Justice. Armed with a harp that can fire "bullets" of sound and hypnotize people, The Song of Justice breaks into the courtroom to take out the criminals. Impulse is eventually able to stop her by snapping his fingers fast enough to cancel out her harp. The trial then continues, and surprisingly, the judge allows the toxic waste dumpers to go free.

Retrieved from "https://heykidscomics.fandom.com/wiki/Impulse_Vol_1_36?oldid=1435347"
Community content is available under CC-BY-SA unless otherwise noted.