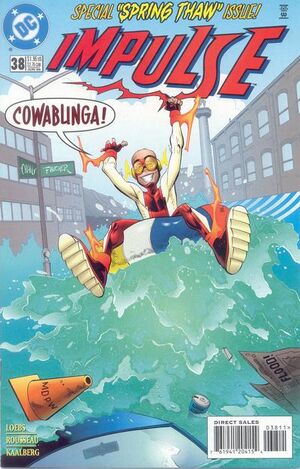 That's a choice? To invite thieves and monsters and … carpetbaggers and murderers into my town?

Manchester, Alabama is flooding, and the whole town has come out, including the super villains — much to Impulse's displeasure. But despite everyone's best efforts, they are unable to hold back the rising water until Bart's friend Roland sends an email to his hero, Chunk. Chunk arrives and sucks up all the excess water for free.

Retrieved from "https://heykidscomics.fandom.com/wiki/Impulse_Vol_1_38?oldid=1435349"
Community content is available under CC-BY-SA unless otherwise noted.