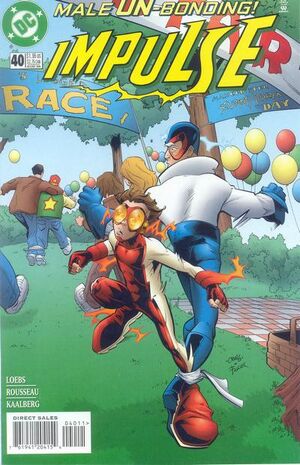 Hi, Max. This is my friend Gamal. He works down at Pete's. I'm going to be running with him, 'cause he won't make me look stupid!

Bart Allen is mad at Max Mercury for not letting him in on his recent plan to catch the toxic waste dumpers, so at a school picnic, Bart spends his time with Gamal. Gamal, an immigrant whose degrees are not honored in America, is forced to work in his brother's convenience store. But after abandoning his post to join Bart at the picnic, Pete fires him. So Bart and Max team up again to help Gamal get his job back.

Retrieved from "https://heykidscomics.fandom.com/wiki/Impulse_Vol_1_40?oldid=1499111"
Community content is available under CC-BY-SA unless otherwise noted.