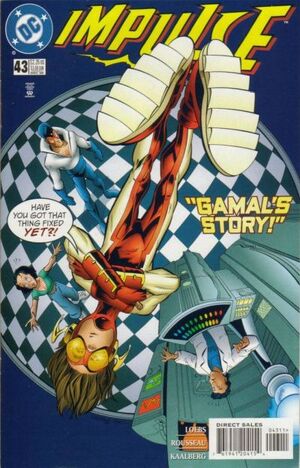 Bart Allen's friend Gamal was a brilliant inventor in his home country, but the government was desperate to become a world power and wanted to use his inventions for war. So Gamal fled to America, but none of the top research labs would recognize his degrees, so he is forced to work in his brother's convenience store, while inventing on the side. One day, Gamal's country sent a team of mercenaries with elemental powers to kidnap him. Impulse and Max Mercury fought the mercenaries, but it was Gamal and his inventions that defeated them.

Retrieved from "https://heykidscomics.fandom.com/wiki/Impulse_Vol_1_43?oldid=1435354"
Community content is available under CC-BY-SA unless otherwise noted.