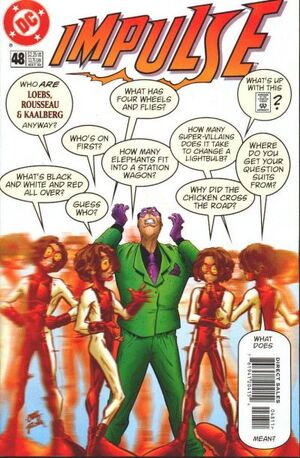 Appearing in "When Is a Riddle Not a Riddle?"Edit

Synopsis for "When Is a Riddle Not a Riddle?"Edit

In attempt to exact revenge on The Flash and Robin, The Riddler kidnaps Max Mercury and Dr. Morlo and plants multiple bombs around Manchester to force Impulse into becoming his pawn.

Batman, Robin, Catwoman, The Joker, The Penguin, Poison Ivy, Bane, and The Flash all appear as characters in The Riddler's demented, delusional explanation of why he's in Manchester.

Retrieved from "https://heykidscomics.fandom.com/wiki/Impulse_Vol_1_48?oldid=1509579"
Community content is available under CC-BY-SA unless otherwise noted.