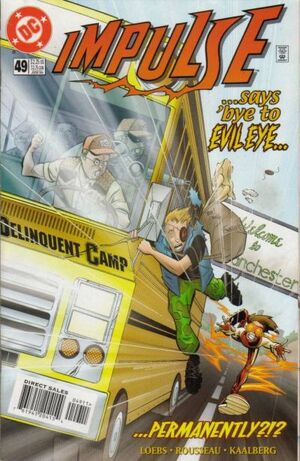 Kid, after all his past scams, if Dad's atoning with something legal and trying to improve society ... I'm not going to interfere ...

Dr. Morlo decided to send his grandson, Eddie "Evil Eye" Parker, off to reform school called Sunnyside Boys Camp, but it turned out to be a corrupt school ran by Rudolph West, the father of Wally West. Even though Evil Eye was usually a bully, Bart Allen and his friends decide they need to help him. Impulse even asks the Flash to help, but he refuses. So Bart and company sneak into the school to rescue Evil Eye, and Morlo and Max Mercury work together to shut down the school.

Retrieved from "https://heykidscomics.fandom.com/wiki/Impulse_Vol_1_49?oldid=1435360"
Community content is available under CC-BY-SA unless otherwise noted.