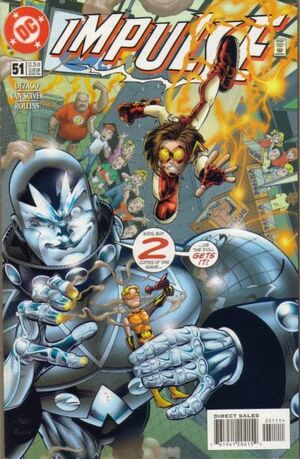 Appearing in "It's All Relative"Edit

Synopsis for "It's All Relative"Edit

While picking up a comic book for his friend Preston Lindsay, Impulse runs across the Fog Prince, who is trying to steal his favorite action figure. Ultimately, Impulse defeats him by recreating a scene from his favorite comic book.

In the future, Inertia monitors Impulse's every move and plans his attack.

Retrieved from "https://heykidscomics.fandom.com/wiki/Impulse_Vol_1_51?oldid=1435362"
Community content is available under CC-BY-SA unless otherwise noted.