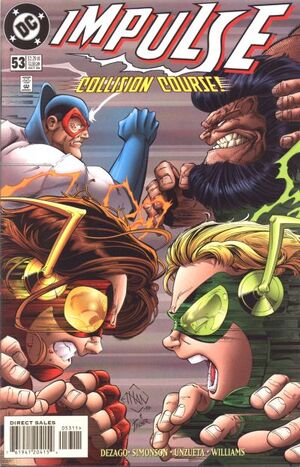 I, as the last Thawne, will finally fulfill my family's legacy — by righting a wrong that has plagued my lineage for centuries!!

Inertia battles Impulse across the world, explaining that he was created by Thaddeus Thawne with genetic material from Bart Allen. Inertia's growth was slowed down and carefully controlled in a tube to perfect his body and mind. Now that he's ready, Inertia plans to get revenge on all the Allens on behalf of all the Thawnes. Impulse is eventually able to gain the upper hand in the fight, so Inertia retreats by releasing Iris Allen. But once he returns to the future, Inertia says his mission was a complete success.

Max Mercury, meanwhile, is able to defeat Kalibak, but he's severely wounded in the fight.

Retrieved from "https://heykidscomics.fandom.com/wiki/Impulse_Vol_1_53?oldid=1435364"
Community content is available under CC-BY-SA unless otherwise noted.