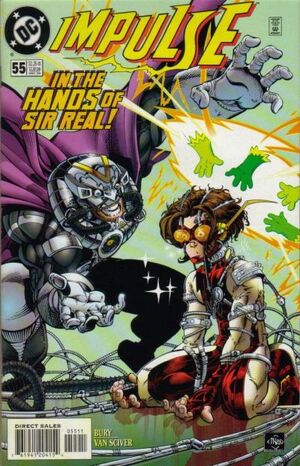 I mean, come on! What kind of geek-o handle is 'Master of Virtual Reality?' I grew up in a VR world. VR is jack when you're up against a real hero. Now, give up and come along … peacefully?

Appearing in "It Ain't Easy Being Greenery"Edit

Synopsis for "It Ain't Easy Being Greenery"Edit

While battling Sir Real, Impulse is caught in a bizarre virtual reality world. He's eventually saved by Max Mercury, but he did learn a valuable lesson about eating his vegetables and not loafing.

Retrieved from "https://heykidscomics.fandom.com/wiki/Impulse_Vol_1_55?oldid=1435366"
Community content is available under CC-BY-SA unless otherwise noted.