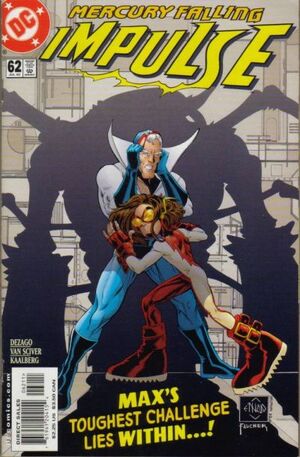 Impulse … Bart … yes, Max is dying. He's lost touch with the Speed Force and it's killing him. Only another speedster can save him, but you know Max … too proud to ever ask for any help … but you'd want to be there to help him, wouldn't you, lad?

Appearing in "Mercury Falling, Part One: A Question of Faith"Edit

Synopsis for "Mercury Falling, Part One: A Question of Faith"Edit

Dr. Morlo has discovered that Max Mercury is losing his connection to the Speed Force and is dying. He theorizes that Max will be healed if he is brought in close contact to the Speed Force. He puts Impulse through several tests to see if he can safely take Max there, but Bart keeps failing, and accidentally unleashes a large monster called the Mudbug in Morlo's lab. Impulse eventually pushes the Mudbug back into its dimension, and he falls in after it. After a brief moment, Impulse pops back out.

The cover is an homage to Detective Comics #345 by Carmine Infantino.

Retrieved from "https://heykidscomics.fandom.com/wiki/Impulse_Vol_1_62?oldid=1435373"
Community content is available under CC-BY-SA unless otherwise noted.