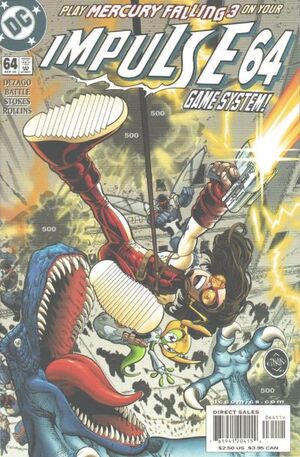 DOX! I gotta get outta here! I gotta get back to MAX! Someone must've stuck me back here! — In the VR!! But who?

Bart Allen wakes up in the same virtual reality he was raised in. He has lots of wacky adventures with his best friend, Dox, until he remembers that he's really Impulse and his father figure, Max Mercury, is dying. Impulse eventually breaks out of the VR to find himself in Inertia's lab with Craydl pulling the strings. Impulse quickly defeats Craydl, and heads off to try to save Max.

Retrieved from "https://heykidscomics.fandom.com/wiki/Impulse_Vol_1_64?oldid=1435375"
Community content is available under CC-BY-SA unless otherwise noted.