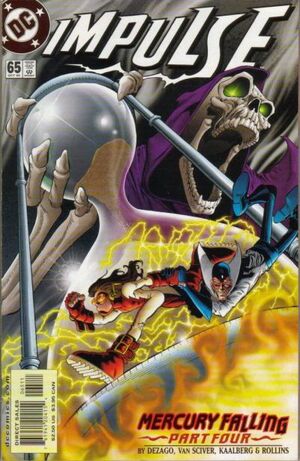 When Impulse pushed the Mudbug back into its own dimension, Inertia switched places with him and impersonated Bart Allen. But after a while, his friends began to notice his change in behavior. Unfortunately, they don't realize it's not the real Bart until it's too late. Inertia uses Dr. Morlo's portal generator to take Max Mercury to the Speed Force. As soon as they disappear, the real Impulse arrives.

Retrieved from "https://heykidscomics.fandom.com/wiki/Impulse_Vol_1_65?oldid=1435376"
Community content is available under CC-BY-SA unless otherwise noted.