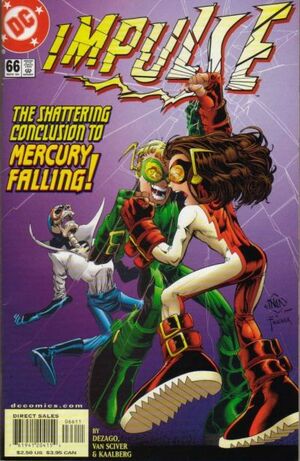 Inertia had always planned to impersonate Impulse so he could take Max Mercury to the Speed Force to kill him. But after playing the hero for so long, Inertia began to doubt his feelings for revenge. Impulse soon caught up with them in the Speed Force, and he fought off Inertia. Ultimately, it was his demonstration of love that confused and enraged Inertia, causing him to run away. Impulse then helped Max regain his health and super speed.

Retrieved from "https://heykidscomics.fandom.com/wiki/Impulse_Vol_1_66?oldid=1435377"
Community content is available under CC-BY-SA unless otherwise noted.