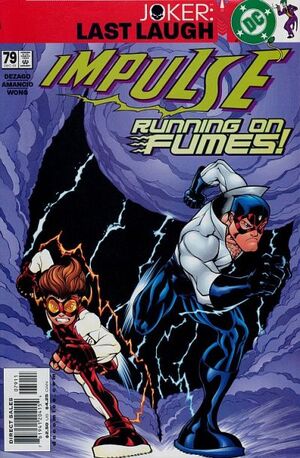 He battled with it quite a bit, but his eventual decision to give up being Impulse was … well … look at him.

Appearing in "No Laughing Matter"Edit

Synopsis for "No Laughing Matter"Edit

Since Bart Allen gave up being Impulse, Max Mercury is on his own to stop an old foe, Ether, who has become stronger thanks to some Joker gas.

Retrieved from "https://heykidscomics.fandom.com/wiki/Impulse_Vol_1_79?oldid=1435390"
Community content is available under CC-BY-SA unless otherwise noted.