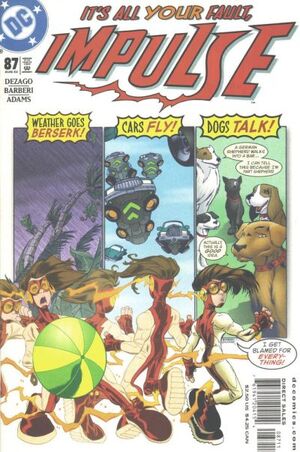 But right now, being the most powerful hero in the universe, I have more important concerns to attend to … like Carol told me, even though I've been trying to do good with alla these cool new magical powers, some of the problems I tried to fix just created even worse problems!

Possessing the magical powers of Bedlam, Impulse has been trying to use them for good, but has been causing even more problems along the way. Things get so bad that the Phantom Stranger has to intervene and take away Impulse's magic and make everyone forget he ever had it. But before he loses his powers, Impulse leaves a note behind for himself that will help him find his girlfriend, Carol Bucklen.

Retrieved from "https://heykidscomics.fandom.com/wiki/Impulse_Vol_1_87?oldid=1435398"
Community content is available under CC-BY-SA unless otherwise noted.