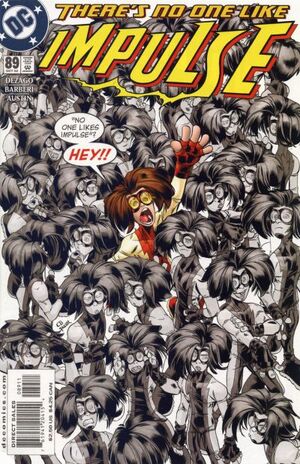 Thanks to everyone out there who've been such a big part of our family!! See ya in the funny papers!

Impulse returns from the future just in time to see Jay Garrick chasing down Rival, who had been posing as Joan's doctor. The two speedsters catch Rival, and Impulse convinces Jay not to kill him, but Rival reveals that he trapped Max Mercury in the Speed Force, then escapes in Impulse's time capsule.

This is the final issue of Impulse. Bart's dog, Dox, gives a brief farewell in the last panel.

Retrieved from "https://heykidscomics.fandom.com/wiki/Impulse_Vol_1_89?oldid=1435400"
Community content is available under CC-BY-SA unless otherwise noted.