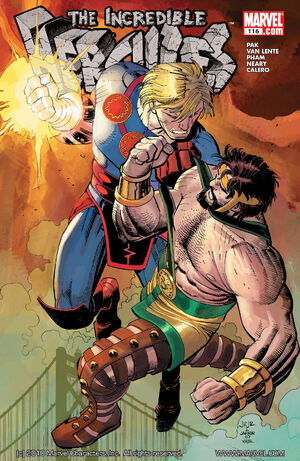 In California, The Eternals, Ikaris and Thena are convinced Hercules is their brainwashed comrade Gilgamesh. Thena cannot convince Hercules with her version of the facts, so Ikarus engages him in battle. Cho and Athena comes to Hercules' aid. Makkari interrupts the battle and admits he has made a mistake. Despite their similarities and almost identical past adventures, Hercules is not Gilgamesh.

Athena summons the Council Elite of the Eternals. She shows them the earth's true enemy, a severed Skrull head. She states that the Skrulls have already conquered the earth...

Retrieved from "https://heykidscomics.fandom.com/wiki/Incredible_Hercules_Vol_1_116?oldid=1433022"
Community content is available under CC-BY-SA unless otherwise noted.