Start a Wiki
Part of the 'Love & War' story arc 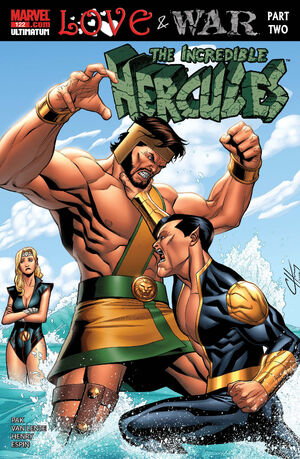 Appearing in "Bullets and Bracelets"Edit

LOVE AND WAR, Part 2 - What's an Atlantean/Amazon war without the Avenging Son himself? For the first time since "World War Hulk," Hercules, Prince of Power, faces off against Namor, Prince of Atlantis! Meanwhile, an infatuated Amadeus Cho dances on the edge of doom with a deadly Amazonian princess -- and loves it, baby!

Retrieved from "https://heykidscomics.fandom.com/wiki/Incredible_Hercules_Vol_1_122?oldid=1569666"
Community content is available under CC-BY-SA unless otherwise noted.