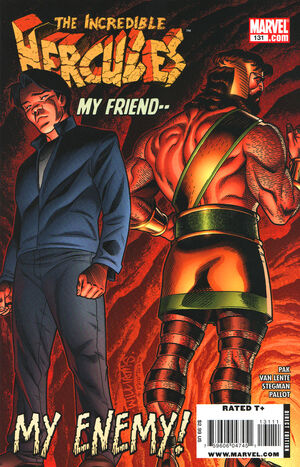 They've battled rampaging gods, enraged Eternals, sinister Skrulls, Avengers Dark and Mighty, armed-to-the-teeth Amazons, and literally gone to Hell and back together. But now, after all this time, and all those adventures, the team-up between Hercules and Amadeus Cho may be...no more! What shocking secret is revealed in this issue that could ruin their friendship forever? Find out here, then come right back next month for a MAJOR change in status in the title that will always be "INCREDIBLE"!

Retrieved from "https://heykidscomics.fandom.com/wiki/Incredible_Hercules_Vol_1_131?oldid=1655420"
Community content is available under CC-BY-SA unless otherwise noted.