Part of the 'The Replacement Thor' story arc 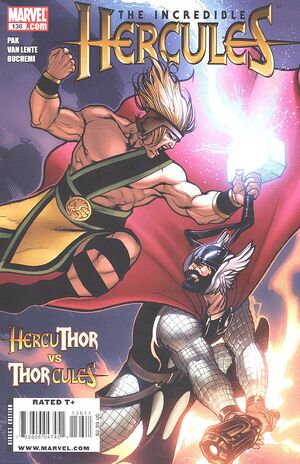 The face-off Herc fans have been clamoring for since his series began is here at last! God of Strength versus God of Thunder! Adamantine mace versus uru hammer! Olympian versus Asgardian! Incredible versus Mighty! That's right -- HERCULES battles THOR! The Odinson discovers the Lion of Olympus has been impersonating him and he's out to prove nothing beats the original! Then, in #137, the epic Secret Origin of Amadeus Cho concludes! He learns his connection with the original MASTER MIND EXCELLO and the identity of who really killed his parents! And once Amadeus knows this, will he look to reunite with Hercules... or destroy him?