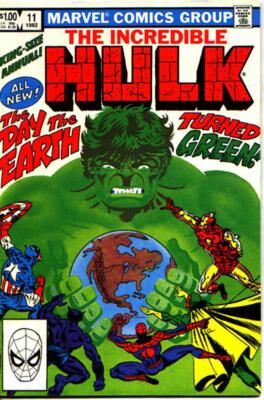 Appearing in "The Day The Earth Turned Green"Edit

Synopsis for "The Day The Earth Turned Green"Edit

The Leader has obtained a sample of Bruce Banner's gamma irradiated blood and used it to cause a "green flu" that is bringing down the inhabitants of New York City; With Spider-Man and the Avengers after him, Hulk uncovers the fact that the Leader has infected the city's water supply and the disaster is averted.

Retrieved from "https://heykidscomics.fandom.com/wiki/Incredible_Hulk_Annual_Vol_1_11?oldid=1721053"
Community content is available under CC-BY-SA unless otherwise noted.