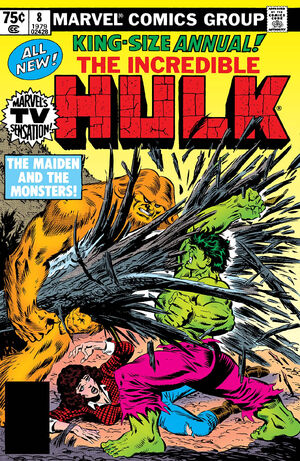 Hulk was sent flying through the skies by the power of Machine Man, and he crashed in Northeastern British Columbia. After feeling the shock from the impact a woman nearby, named Maureen Mores Friesen, went outside to see what happened. She found Hulk down with his head buried and she tried to help him so he won't suffocate. When Hulk wakes up, he sees her and thinks she is an enemy but the girl explains to him what happened and Hulk calls her a friend. He take Mores to her home where Hulk calmed down and became Dr. Bruce Banner.

In the meantime the Canadian army is trying to find someone to fight Hulk. But the only active member of the Alpha Flight is Sasquatch. After a conversation they call him. When Dr. Langkowski learns the situation he is excited to see who is more powerful, Hulk or Sasquatch, and accepts the mission. At the arrival point he transforms and lands in the area.

Maureen Mores Friesen, after a conversation with Dr. Banner, has gone out. After some time Bruce Banner heard a scream and he goes out with a shotgun to find Mores at the hands of Sasquatch. When Bruce calms down, he tries to communicate with Sasquatch, but Dr. Langkowski want Hulk so he tried to enrage him by pushing him off a cliff. After that the two monsters fight each other. From their battle a rocky avalanche starts and Mores is in its way. Sasquatch is trying to save her when Hulk thinks he wants to attack her. When the avalanche stops, Sasquatch popped out from the ground with the girl seeing that the area is destroyed because of him. Then Hulk becomes enraged and wants to kill Sasquatch, but he stops and flees when he sees the scared face of the girl.

Retrieved from "https://heykidscomics.fandom.com/wiki/Incredible_Hulk_Annual_Vol_1_8?oldid=1551913"
Community content is available under CC-BY-SA unless otherwise noted.