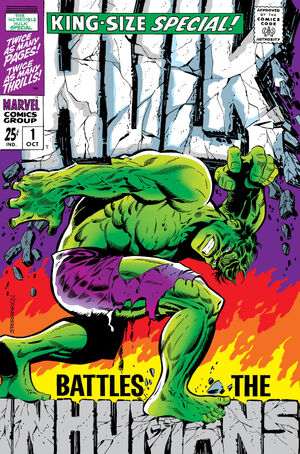 Appearing in "A Refuge Divided!"Edit

Synopsis for "A Refuge Divided!"Edit

As the Hulk wanders the South American country side, there is a trial going on in the Hidden Land of the Inhumans. Black Bolt is trying a number of his subjects: Aiero, Leonus, Falcona, Nebulo, Timberius, and Stallior for the crime of treason, a crime they are found guilty of. Black Bolt has them banished to another dimension which is facilitated by Lockjaw.

Later, Lockjaw appears on the mountains where the Hulk is fighting off some panicked villagers. The Hulk attacks Lockjaw, who promptly teleports Hulk to the dimension where the evil Inhumans have been banished. The evil Inhumans try to befriend the Hulk, who tries to break out. Maximus arrives and recruits them all to his plan to overthrow Black Bolt, and teleports them all back to the Hidden Land. The Hulk, not wanting to get involved in Maximus' plot breaks free and begins smashing his way through the Inhumans' home. This provides Maximus the distraction he needs to get the weapon he seeks to use to overthrow Black Bolt: a device created by ancient Inhuman scientist Romnar that can absorb people.

However, they realize the only one with the power to break through the barrier behind which the weapon is stored is the Hulk, and so Nebulo tricks the Hulk into helping them break the barrier and gain access to Romnar's device. Building a ray-gun to use the device, the evil Inhumans use it to attack Black Bolt, while the Hulk is let loose upon the Hidden Land once more. Black Bolt is able to defeat them when they cannot stop squabbling and are all fighting for control over the Romnar device to use for their own ideals of conquest. To try and get back in Black Bolt's good graces, the evil Inhumans try to stop the Hulk along with Gorgon; however, it takes the might of Black Bolt to stop the Hulk's rampaging.

Realizing that the Hulk is an outcast seeking a home, Black Bolt invites him to stay in the Hidden Land; however, the Hulk knows that while Black Bolt accepts the Hulk all the other Inhumans fear and hate him, and so the Hulk leaves the Hidden Land to find his own place in a world that fears and hates him.

Retrieved from "https://heykidscomics.fandom.com/wiki/Incredible_Hulk_Special_Vol_1_1?oldid=1433074"
Community content is available under CC-BY-SA unless otherwise noted.