Part of the 'Flashback (Event)' event 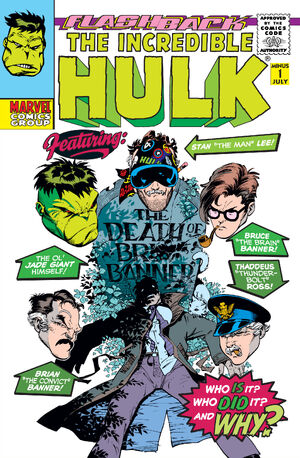 Landing in a graveyard en route to New York, he meets Stan Lee digging a grave. Stan and an acting troupe then begin acting out the story of Bruce Banner's Dad. The story cuts between real life flashbacks of the events and the troupe acting them out. The story begins with Bruce and General Ross meeting to discuss the development of the Gamma bomb when Bruce gets a phone call about his father, Brian Banner, being released from the Institution he's been in since he murdered Bruce's mother, Rebecca Banner, and beat Bruce into lying for him to cover for him. At the institute the doctors assure Bruce his father has changed but Bruce refuses to believe them.

Later Brian is shown staring at a knife and during the night, he approaches Bruce, when some begins pounding on the door. Answering the door, Bruce greets General Ross, who refuses to even look at Brian as he knows what he did and doesn't trust him. He berates Bruce for allowing his father to stay with him for what he did and leaves. A few days pass and Bruce begins noting his father acting odd and tells him he should sign himself into the institute. On the eve of Rebecca's death, Brian begins yelling at Bruce and proclaims its the evil within Bruce that's causing it as Bruce leaves to visit her grave.

At the graveyard Brain attempts to kill Bruce due to the formers belief his son is a mutant and should be dead because of it. However, something snaps inside Bruce and he lashes out, knocking his father into his mothers gravestone, killing him. When the police find the body the next day they put it down to a random mugging.

Back in the present, Stan explains that the reason Hulk can see ghosts is for the sole reason so he can keep an eye for his fathers ghost who he fears is going to come back for him, and Stan and the troupe begin to fade into nothing with Stan saying that "Hulk just wants to be left alone"

The theatre they perform on is named Kirby Theatre a reference to Jack Kirby, the long time collaborator with Stan Lee.

Retrieved from "https://heykidscomics.fandom.com/wiki/Incredible_Hulk_Vol_1_-1?oldid=1406572"
Community content is available under CC-BY-SA unless otherwise noted.