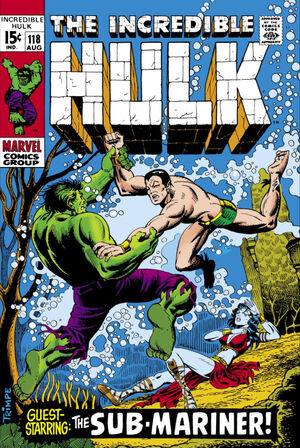 Appearing in "A Clash of Titans"Edit

Synopsis for "A Clash of Titans"Edit

Lady Dorma's undersea craft is marked "Aurora" by artist Herb Trimpe. This is intended as a lark as Aurora produced numerous plastic models during this time. Ironically, Herb Trimpe would help produce a small Hulk comic and box cover for the Aurora company in 1974 in conjunction with their Hulk model that year.

Retrieved from "https://heykidscomics.fandom.com/wiki/Incredible_Hulk_Vol_1_118?oldid=1629998"
Community content is available under CC-BY-SA unless otherwise noted.