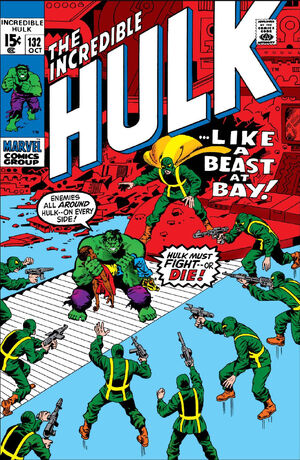 -- He don't want to hurt nobody! He just wants people to let 'em be!

Appearing in "In the Hands of HYDRA!"Edit

Synopsis for "In the Hands of HYDRA!"Edit

The military has the Hulk in their possession since the creature was re-merged with Bruce Banner, and have had the beast tranquilized since it's capture. General Ross, Glen Talbot, and Betty Ross watch over the supposedly sleeping beast and are concerned that it has not yet reverted back to it's alter ego, and wonder if perhaps this time Bruce Banner is lost forever. The Hulk revives when they try to administer another dose of tranquilizer and the Hulk tells them that he'd developed an immunity to the tranquilizers and biding his time. The Hulk then smashes free of his restraints, after a brief struggle with the military, the Hulk is once more knocked out and a hysterical Betty assumes that they killed the Hulk, however General Ross shows her that the green giant is still alive and has Glen escort her off.

Jim Wilson informs General Ross that he is going to leave, not feeling comfortable among the soldiers and leaves. Needing Wilson because -- like Rick Jones before him -- he has established a friendship with the Hulk, Ross sends Glenn Talbot to tail the boy. However, Glenn betrays himself when Jim spots him and the boy makes a break for it. Turning into an alley, Jim finds a Hydra ship waiting for him and hops aboard the ship and it flies off before Talbot can arrive, Glenn then finds a nearby phone booth to report in. Jim meanwhile is taken to a secret Hydra base where one of their leader tells Jim that they have a common foe in the military and that they intend to rescue the Hulk. This is a trick of course, and Hydra manages to convince Jim to help them out after they show him a fake film reel of the Hulk being tortured with military weapons.

Hydra then has Jim returned to the military base, where he presents himself to General Ross and asks if he can see the Hulk. Granted access to the room where the Hulk is being kept, Jim helps Hydra air lift the Hulk's body out of the ship. Once they have the monster secured, the leader of Hydra tells Jim the organizations true intentions of rescuing the Hulk: To brain wash the monster into being a loyal member of Hydra. When Jim tries to attack the leader, the other Hydra agents hold him at bay. Watching his friend being roughed up by Hydra angers the Hulk who breaks free of his bonds.

During the fight, Jim is hit in the crossfire and is injured causing the Hulk to become more enraged and start smashing the ship. This attracts the attention of the military who send ships to investigate prompting the Hydra agents to abandon ship. As the military secures the Hydra vessel the Hulk abandons ship with the injured Jim. As General Ross curses his loss of both the Hulk and Jim, the Hulk vows that if Jim dies he will make the entire world pay.