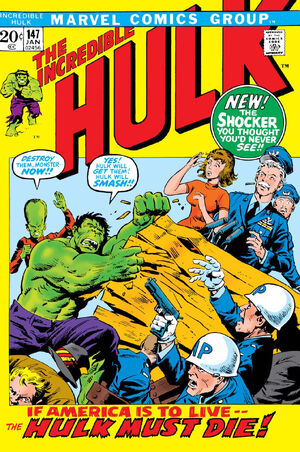 Appearing in "The End of Doc Samson!"Edit

Synopsis for "The End of Doc Samson!"Edit

Synopsis for "Heaven Is a Very Small Place!"Edit

The Hulk lands in the desert and witnesses the formation of a small town, the result of an elaborate mirage. To his surprise the people in the town seem warm and friendly, however in reality the cannot see the Hulk and the Hulk confuses their neighborly gestures as being directed at him. The Hulk wanders around the town and realizes that everything passes through him as though he were a ghost.

Confused, the Hulk finds a little girl in a wheelchair, who can apparently see and talk to him. Calling him a friend she tells him that they will talk forever. But just as suddenly as the Hulk meets this girl, she and the mirage world around him suddenly vanish.

Alarmed at the sudden abandonment, the Hulk screams for the town to come back, but to no avail. After a moment of sorrow, the Hulk angrily strikes at the ground, causing an earthquake large enough to register at a seismology center.

Retrieved from "https://heykidscomics.fandom.com/wiki/Incredible_Hulk_Vol_1_147?oldid=1632677"
Community content is available under CC-BY-SA unless otherwise noted.