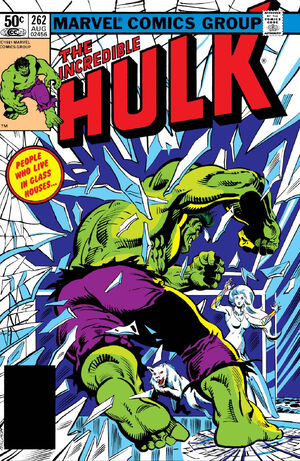 After spending time in LA for a bit, Bruce Banner sees a boy running at him before a man and a woman adminster some drugs to him, proclaiming he's their son and has escaped from a nearby clinic. Banner gets a job at the clinic and before long finds out the truth, the boy is in fact an alien whose hvaing his memories repressed by drugs. One night they arn't adminstered and the creature begins to remember its true race and goes on a rampage, Banner changes into the Hulk and the alien and The Hulk fight before the Dr administers the drug to it, reverting it back into a boy before the Hulk leaps away

Retrieved from "https://heykidscomics.fandom.com/wiki/Incredible_Hulk_Vol_1_262?oldid=1632940"
Community content is available under CC-BY-SA unless otherwise noted.