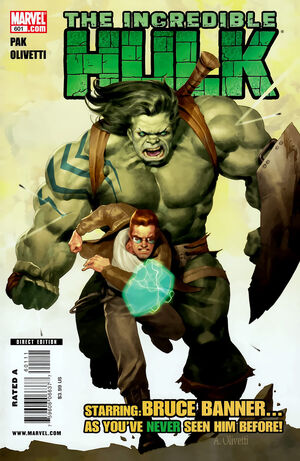 Gamma fans rejoice -- the rumors are true! The INCREDIBLE HULK book returns as an ongoing series written by acclaimed PLANET HULK and WORLD WAR HULK scribe Greg Pak! Get ready for Bruce Banner as you've never seen him, the Son of Hulk in a whole new world of smash, and an insane new adventure that changes everything for everyone's favorite Green Goliath! With art by Ariel Olivetti (CABLE) and introducing a new, regular bonus backup SAVAGE SHE-HULK story written by Fred Van Lente and drawn by Michael Ryan!

Lyra demands to Director Little Sky as to the whereabouts of Jennifer Walters, the first She-Hulk. Sky tells her that Walters is a freelance operative for A.R.M.O.R. and is not under their jurisdiction. However, Agent Alexander Erde informs her that he tracked Walters to Death Valley. While taking a Shock Carrier, Lyra confides in Erde on how lonely she is and see Walters as her only true friend. Erde says that many people in A.R.M.O.R. would care for her. Their conversation then leads into a kiss. However, their moment in interrupted when a woman bleeding electricity brings their craft down. With Erde injured, Lyra commands Boudicca to called H.A.M.M.E.R. for rescue, but their communications are being jammed. Boudicca also detects three female individuals approaching them, containing DNA barcoded by the Origins Corporation. Each one, Aberration, Axon and Morass bears the DNA of of the Hulk's foes, Abomination, Zzzax and Glob, who have been sent by Norman Osborn to apprehend her. Lyra attempts to charge at them, only to be constricted by Morass. Axon then absorbs the bioenergy of Erde, rendering him a husk. Enraged, Lyra swears that they are all dead. Meanwhile, Gamma Corps: Black is ordered by General Ryker to bring Lyra back for genetic harvest.