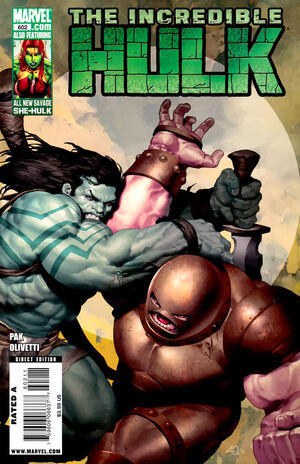 marks the spot as the most insane father and son duo in the Marvel Universe take on one of the Green Goliath's most formidable adversaries. That's right, it's the JUGGERNAUT, bi--bi--boys and girls! What happens when an unstoppable force meets the Old Power and the gamma-fueled genes of the Strongest One There Is? Massive destruction and emotional revelation, that's what! Continuing the acclaimed writer Greg Pak's return to the "Incredible Hulk,”plus, in the "Savage She-Hulk" backup story written by Fred Van Lente, Lyra takes on the all-new Gamma Corps Black!