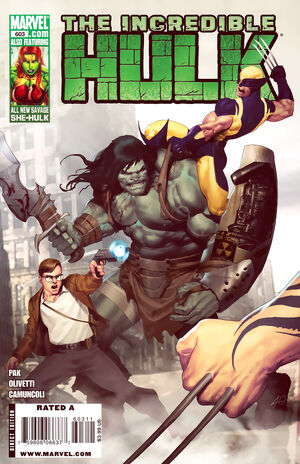 Smash meets slash as Banner and Skaar finally come fist-to-claw with Logan and Daken! But will the battle royale come down to Wolverines versus Hulks -- or fathers versus sons? Anything's possible as the Marvel Universe's most insane father/son duos throw down! Plus, in the SAVAGE SHE-HULK backup by Fred Van Lente and Michael Ryan, Lyra continues the search for Jennifer Walters!

In Death Valley, Aberration and Axon are running from Lyra, who is tailing them like a skillful predator. Axon says that they have to keep moving, reminding Aberration about General Ryker's passionate speech about killing everyone who gets in their way. Boudicca mocks them and tells him that they should abandon her. Aberration thinks to destroy Boudicca, only for Axon to stop her, reminding her that Ryker and Osborn would kill them if they don't get the device back to them. They then spot a nearby town, Badwater. They then respectively begin absorbing any bioelectricity and water they could find to replenish themselves. They also follow Ryker's explicit orders to have no witnesses. The then hold the townspeople hostage, demanding that Lyra come out and surrender. Then suddenly, a manhole beneath Aberration pops up and hits her squarely in the chest. Lyra climbs out of the hole, reminding them that they are dead women.

Retrieved from "https://heykidscomics.fandom.com/wiki/Incredible_Hulk_Vol_1_603?oldid=1750221"
Community content is available under CC-BY-SA unless otherwise noted.