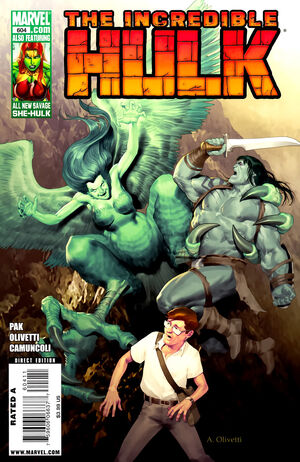 After picking fights with the Juggernaut, Norman Osborn, and the Wolverine clan, the most insane father and son team in the Marvel Universe might actually be bonding. But everything's about to blow wide open for Bruce Banner and his big, green, barbarian son Skaar when one of the Hulk's greatest enemies brings back the most important villainess Bruce Banner's ever faced. Who is the Harpy? And whose side will Banner take when she and Skaar meet sword to claw in a gamma-powered deathmatch? Stone might bleed, feathers might fly, and hearts might break in the highest stakes battle yet for Banner and Son! Plus, The Savage SHE-HULK continues her quest to find Jennifer Walters in a back-up by Fred Van Lente and Michael Ryan!

Profiles are listed for the surviving members of Gamma Corps: Black. Rana Philips had abused prisoners in Aquiria before shooting her superior officer who supposedly ordered the abuse and was formerly engaged to her before leaving her for another MP in their company. The other was Erin Cicero, who had post-traumatic stress syndrome from being the sole survivor of an ambush in Symkaria. She became confused over who was the enemy and killed her family as a result. The judgement for such crimes was death.

In the present,Lyra is fighting Aberration, who is still angry over her ex-fiancee's betrayal and threatened to crush Boudicca if she takes one more step. Lyra responds by smashing the ground beneath her,, before slamming Aberration into a gas station, causing and explosion. When the smoke clears, Aberration walks out, having expanded in mass. Lyra retrieve Boudicca and asks what's happening. Boudicca explains that when Aberration gained Abomination's DNA, the process worked like a super-cancer. Since she destroyed her original flesh in the explosion, it has all been replaced by tumor-like cells. Origins Corporation won't perfect the process until 2026. An enraged Aberration then begins thrashing Lyra around, blaming General Ryker for using her. She uses on of her extra hands to grab Lyra by the throat, demanding her power. Lyra retorts that she had the power and could've said no, before using a lamp post to hit her in the brain, killing Aberration.

Unfortunately, Axon demands that Lyra give her her gamma sight or she'll kill everyone in town.

Retrieved from "https://heykidscomics.fandom.com/wiki/Incredible_Hulk_Vol_1_604?oldid=1755451"
Community content is available under CC-BY-SA unless otherwise noted.